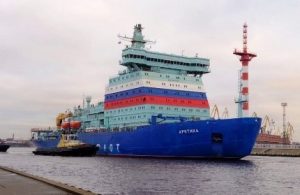 The Arktika, Russia’s largest and most powerful icebreaker has just completed its first round of sea trials. The Arktika is under construction at Russia’s Baltic Shipyard in St. Petersburg, with final sea trials scheduled for March-April 2020 followed by delivery planned for May 2020. The icebrekaer is first in Russia’s project 22220 which is planned to produce three nuclear-powered icebreakers for Russia’s state nuclear agency ROSATOM. Once delivered, Arktika will become the largest and most powerful icebreaker in the world, used for ship escort and icebreaking in the Russian Arctic.