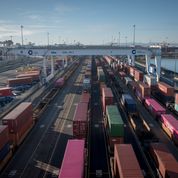 Last week GCT Canada announced the completion of the final two tracks of the GCT Deltaport Intermodal Rail Yard Expansion Project.  This project is the second, $300 million privately-funded stage of the multi-phased expansion Deltaport Terminal Road and Rail Improvement Project (DTRRIP), a collaboration with the Port Authority and the Province of British Columbia. The densification approach to this project, demonstrates GCT’s commitment to increasing capacity within its existing footprint and minimizing operational and environmental impacts on the surrounding community.

Rail handling capacity at GCT Deltaport has increased by more than 50% due to the project. The total terminal capacity is now 2.4 million TEUs annually. This state-of-the-art, fully operational rail yard provides necessary surge capacity and added certainty on transit and dwell times for our customers.