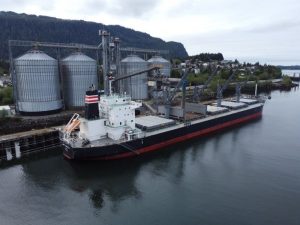 The MV New Pinnacle, a chartered vessel from NYK Bulk and Projects Carriers, made its first call in Prince Rupert this week marking the significance of this growing trade to Asia. The arrangement with NYK came after Pinnacle signed three contracts with customers in Japan in a span of six months, underscoring both Japan’s strong commitment to decarbonization and the strength of Pinnacle’s competitive position in this market.

In 2020, exports of wood pellets from Prince Rupert saw a 33 per cent increase which played a major role in the spike in cargo volume in 2020 at the Port which also aims to be the second largest Port in Canada. Also, last year on May 29  Pinnacle Renewable Energy set a new record for the largest load of wood pellets ever shipped from Canada when the Panamax-class vessel MV Siboney M departed Westview Terminal with 63,601 tonnes of wood pellets bound for the United Kingdom.

British Columbia’s wood pellets are made entirely from the residuals from sawmilling, harvesting or low-grade logs rejected by the sawmills and pulp mills. Every year nearly 10 million cubic metres – or roughly 10 million telephone poles worth of wood is wasted in BC, and literally goes “up in smoke” in slash pile burns or is left to rot in the forest, becoming a significant wildfire hazard.