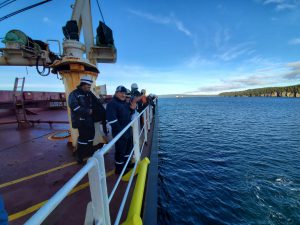 On December 29th the Philippines implemented a new travel ban barring travellers from Canada and 19 other countries from entering the country until at least mid-January in an effort to prevent the spread of the new coronavirus variant.  Filipino citizens who wish to travel to countries with the reported new variants will be required to follow existing exit protocols put in place by the Philippine government, as well as entry protocols of the respective countries they wish to travel to according to the government memorandum.

Following the announcement, the Philippines Port Authority released its new guidelines for conducting crew changes during the first two weeks of January. The guidelines cover a total of 21 countries ranging from Australia, Canada, the United States, most of Europe, South Africa, and parts of Asia including South Korea and Singapore.  Foreign seafarers who have been in any of the listed countries in the 14 days preceding their arrival in the Philippines are restricted from entering the country. Foreign seafarers coming via Canada and the United States are still permitted to enter the country only at Manila and must go into a 14-day quarantine at one of the facilities designated by the authorities. The quarantine is required regardless of a negative result from a PRC test.

Filipino seafarers returning to the country are facing similar restrictions if they have been in any of the listed countries in the past 14 days. They too can only return to Manila and will also be required to undergo a 14-day quarantine at a designated facility. Again, this is regardless of if they have a negative result from a PRC test.

The current suspensions of crew changes are until January 15, 2021. The Philippine Ports Authority, however, warned that it could be extended and that additional countries might also be added to the restrictions.