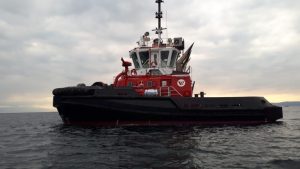 The first of two tugs sold by Sanmar Shipyards to Canadian West Coast operator Seaspan Marine Transportation has arrived safely at its new home in Vancouver following a 12,500 nautical mile, 55-day journey.  Delivered under its own steam by a crew from The Netherlands-headquartered maritime delivery company Redwise, the 2015-built tug has been renamed Seaspan Raptor by its new owners. The vessel had previously been operating in Turkey as part of Sanmar’s own fleet, where it was known as Bogacay Vlll.

Measuring 24.4m LOA, with a moulded beam of 11.25m, the tug can deliver an impressive 78 tonnes of bollard pull and a free running speed of 13.5 knots. Tug’s main engines each produce 2,350kW of power. Both Seaspan Raptor and its sister have a fuel capacity of 74.2m3, are escort rated and feature Class 1 fire-fighting capability.